It had always been the intention of the SAGS project to collect as much data about the behaviour of different collector types on the ground temperature. To this end a system of temperature monitors was devised to be placed in the GeoKOAX hole and the U pipe hole. Various options were investigated such as fibre optics, daisy chained computer controlled sensors and powered thermistors, but eventually a more simple solution involving Thermocouples was decided upon. Thermocouples are two dissimilar metals connected to form a junction, and the temperature of this junction will then vary with the temperature allowing it to be read by a data logger. It was decided that 4 thermocouples per hole at varying depths connected to a data logger could record temperature changes continuously for as long as was needed, and a reading every 15 minutes for at least a year was deemed sufficient. 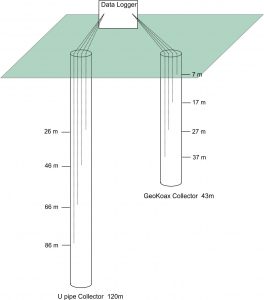 These thermocouple cables were continued form the borehole, back to the house (via an underground pipe buried in the driveway) where they are connected to a mini PC and TP 08 data logger. Since the house in not powered as of time of writing this system is ready to begin temperature logging, and is awaiting electricity to do so.

Logging will be automatic and continuous at an interval of 1 reading of the entire system every 15 minutes, The logger will read each of the sensors at each depth as illustrated  as well as temperature check on the logger itself , for a suite of  8 downhole data points every 15 minutes. This is then stored locally on the mini PC, and will be read remotely as needed.

The 8 thermocouples will provide live temperature readings from down the hole once the system is in operation and will allow to record the effects of using the solar thermal panel as temperature inputs in the winter and measure the ground temperature response as part of the long term operations of the system.

This is the first real time monitoring of downhole temperatures in a geothermal borehole in Ireland, and the valuable insights and data will be made available on this website