Drilling on the Druids Glen site commenced on the 14th of September and ran until 16th of September. The drilling was conducted by Nicholas Wall of Walls Well drilling. Drilling of two 48m boreholes for the GEoKoax and a 100m borehole for the U pipe were drilled over the three days.   Drilling was steady through the hard Precambrian rocks of the Bray head Formation, with moderate amounts of water encountered. The three days also saw the insertion of the heat collectors into the drilled holes. 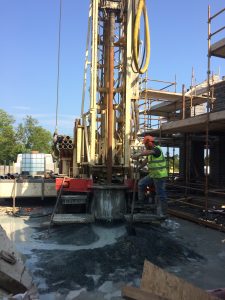