The  SAGS Project will  install  2  types  of  different  geothermal  collectors  at  the  site  of  a new build  residential  dwelling at Druids Glen, Wicklow, Ireland   during  the Summer of  2016 . This consists of a single U pipe type collector of 100m and 2 GeoKoax of 50m each. All three of these holes are backfilled with thermal grout.

Before connection to the house, the  collectors  will  be  tested  using  a  Thermal  Response  Test  in  the  same  ground  conditions  and  based  on  the  individual  results,  the  range  in  ground  temperature  over  25  years  of  operation  will  be  simulated.    This  is  typical  best  practice  in  the  design  and  sizing  of  ground  collectors.    The  results  of  the  test  will  show  the  most  efficient  collector  that  will  be  matched  with  the  solar  thermal  collector and will also help size the solar thermal collector (estimated at  3kW  solar  thermal  capacity  (c.  6m2) of evacuated tubes).

The results of this Thermal Response  Test  will be used to build an operational model to simulate the performance of the system with and without the solar assistance to the ground loop. This will be done by a combination of the commercially available EED and GLD softwares. 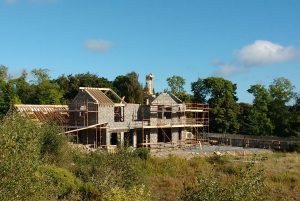 House under construction as of September 2016

Based on the computer modelling and Thermal Response Testing the 100 m double U collector or the 2x50M GeoKoax will be included as part of the house development.  Detailed monitoring services  will be installed and will cover:

The outputs and interpretation of this data collection will be made available as part of a web based interface, particularly of the 2016/2017 heating season.
The  project  partners  expect  to  provide  case  study  data  from  these  trials  at  the  Energy  Show  in  2017.